UNIVERSITY PARK — NFL scouts from 26 teams came and went, in and out of the doors to Penn State’s Holuba Hall on Tuesday.

Inside, former Penn State players spent the morning auditioning for them — some for the second time. Vaunted receiver Allen Robinson was one of them whose aim was to improve his stock before May’s NFL Draft.

“It’s everybody’s dream and I would love to go in the first round,” Robinson said. “But I can’t control that. So wherever I end up going, God has blessed me with being picked by a team once draft weekend happens. So all I can do is stay prepared, stay ready and once my name is called, just try to go there and show those guys what I can do and try to earn a spot on the field.” 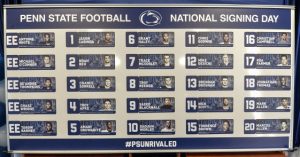 “I’m excited for the future of Penn State football”, said Michael Mauti.  When asked about what he thought about Coach Franklin, Michael responded ‘It’s pure energy right now. A shot of adrenalin into the Penn State program.” “I’ve got no doubt in my mind that he is going to bring a National Championship to Penn State” Both he and Lavar Arrington were greeted with a standing ovation from the crowd.

“We are a family that nothing or no one will ever, ever break” said Lavar. ‘It’s time to bring the family back together, and I am here to represent that piece .”

Coach Franklin and Lavar then went through the rundown of each member of the signing class, accompanied by a clip of their high school highlight film.

Christian Hackenberg and Jordan Lucas also took the floor to welcome the new recruits.  Lucas joked with LaVar about DBU  joining the ranks of LBU.

Coach Franklin ended the evening by addressing the crowd. “United we cannot be stopped”. “You’re not going to find a coaching staff or  a group of assistants that’s going to work harder to make you guys all proud both on and off the field.”

You can learn more about each member of the 2014 signing class at GoPSUsports.com

“Penn State Football – The Signature Event” will be held in the Bryce Jordan Center on National Letter of Intent Day. The doors will open at 5 p.m. for general admission seating, with the program starting at 6 p.m. Tickets for the event are $5.00 and Penn State students will be admitted for free with a valid Penn State ID at Gate A. The Jordan Center concession stands will be open before and during the event.

“Our staff is so appreciative of the heart-felt welcome from Nittany Nation. The overwhelming support is unrivaled,” said Franklin, who was introduced as head coach on Jan. 11. “We are very excited about the response we have received from recruits, their families and high school coaches. February 5th can’t come soon enough; we are looking forward to welcoming the new additions to our football family.”

Franklin was named the Nittany Lions’ 16th head football coach on Jan. 11. A product of Langhorne, Pa., Franklin led Vanderbilt University to unprecedented success during his three years as head coach, including a pair of nine win seasons and bowl victories the past two years.

Franklin will introduce the members of his coaching staff and speak about each of member of Penn State’s Class of 2014, including the five student-athletes who enrolled in classes earlier this month. Video highlights and biographical information on each signee will be shown on the Jordan Center videoboards while Franklin speaks about each future Nittany Lion.

UNIVERSITY PARK, Pa. — The National Football Foundation (NFF) and the Bowl Championship Series (BCS) announced that Penn State standout John Urschel (Williamsville, N.Y.), the 2013 William V. Campbell Trophy recipient, will be honored on the field during the first quarter of the VIZIO BCS National Championship between No. 1 Florida State and No. 2 Auburn.

The BCS title game is 8:30 p.m. tonight (Jan. 6) at the Rose Bowl in Pasadena, Calif., on ESPN. National Football Foundation President & CEO Steve Hatchell will make the presentation to Urschel in front of a sold-out crowd of more than 93,000 fans.The William V. Campbell Trophy, endowed by HealthSouth, is presented to the nation’s premier college football scholar-athlete. A two-time first-team Capital One/CoSIDA Academic All-American, Urschel will receive a total of $25,000 for post-graduate work.
Read more at PSU.edu

The date for ticket sales has not yet been released.

December 2, 2022
The State College Quarterback Club is happy to inform you that we will be holding a bonus weekly... more»

November 15, 2022
Join us this Wednesday with Safety Jaylen Reed (#7)  from Detroit MI, and Safety  Zakee Wheatley... more»
PSU Links
Like Us on Facebook
Search Our Site